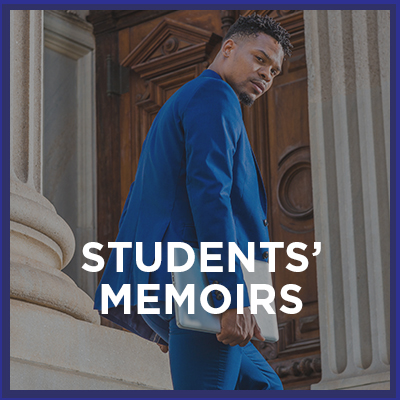 It begins this way: you meet up with a person, let’s say a fellow student, with whom you discuss for a minute or two, at which point, you are still just an ordinary mortal. Then he finally throws the big question and asks, “what course?” you let out in a low, deliberate and unassuming tone, “Law”. Chances are, you may just not be able to take in the outburst of admiration (or otherwise) that follows. At that point, you stop being an ordinary mortal, and you now become “a Law student“, a somewhat different kind of mortal.

Society has its stereotypes about every profession. For lawyers, the stereotypes may be flattering initially, but with time, may dissolve into distaste and lose its appeal. It is these same stereotypes that Law students grow into, and while some of us may be able to maintain our personality regardless, others find themselves bending to these overwhelming ideologies about being a Law student, which sometimes conflict with their true personalities. What society sees in the end, is a bloated persona; two different persons living in one body and bloated things certainly do not look appealing.

This article seeks to debunk certain myths about Law students.

This is the most bigesst of the myths. In most schools, Law students are perceived as thinking too highly of themselves and this may not be farfetched.  In most universities, Law faculties set higher admission cut-offs than most other departments and faculties. This gives the presumption that Law students would want to distance themselves from students of other faculties with lower cut-offs. With time, the presumption is sustained where such students naturally respond to this perceived sense of achievement by developing high self-esteem, which in itself is certainly not a bad trait. However, once the high self-esteem is threatened by a non-Law student or Law student in a lower class, Law students often end up being defensive and come off as rude, arrogant and proud.

In effect, the perceived pride stems first from a sense of academic superiority to other faculties and later from the expectation that if you are studying Law, you are noble and learned. This may explain why Law students never want to lose arguments.

However, Law students are not necessarily the best students. Although Law students are generally intelligent, there are several highfliers in other faculties who may perform even better academically in their respective course of study. The societal expectation of lawyers and their indispensability adds a chip to the shoulder and not all are capable of handling this. Law students are definitely not proud; they are human beings who are just as flawed as everyone else.

Glanville Williams in his book, “Learning the Law”, makes one thing clear: studying the Law is no child’s play. The academic demands of Law can be quite sapping, and if we are honest, we have, at some point, questioned our decision to study law. Considering the fact that Law is a highly competitive course, no one wants to stay at the bottom of the class and some do not like the middle rung either. The outcome could be a student who appears to have no social life, but a bookworm who hardly creates time to relax and take a break.

Related: Skills You Need to Become a Lawyer and how to Develop Them

Litigation has been around for a long time and in most legal systems, it is still the major means of dispute resolution. Therefore, the myth that Law students will only end up arguing in courts is not without basis. However, with new practice areas such as Maritime, Finance, Corporate Law, Energy and Projects, Intellectual Property, Tax and Alternative Dispute Resolution springing up, the legal profession is fast developing.

The position globally is that Law continues to go through a major shift with advances in Big Data, Artificial Intelligence, machine learning, cloud computing and robotics and Law students and even qualified lawyers are responding to this shift. Although some Law students may find fulfilment in traditional advocacy and litigation, there are others who are carving a niche for themselves within these new and upcoming practice areas.

This is yet another widely held fallacy; that Law, being a professional course, automatically promises the better life. In Nigeria for instance, every year, the Nigerian Law School pumps approximately 4,000 students into a very small labour market which in truth is very choking, and thus leaves many to end up settling for less than what they set out to achieve.

Although the field of Law is generally lucrative, the chances of hitting gold depend on the comparative economy and job opportunities of different countries or even cities. The most lucrative legal practice is concentrated in megacities like Lagos, Port Harcourt, Abuja and Calabar. This also plays a very important role in laying a good foundation for Law practice as well as affects access to quality internships, career advancement initiatives, mentorships programs, and acquisition of intermediate and advanced digital skills. However, students are stepping up their game as they are aware that studying Law does not by default guarantee a bright future as deliberate efforts have to be made to grow out of mediocrity and stand out from the crowd.

Further into their studies, Law students are taught to be highly analytical, sorting through legal issues in case scenarios and applying the relevant laws. Additionally, the rationale behind most of the decisions by judges, echo the need to distance from emotion and to never sacrifice logic on the altar of emotion.

This, however, should not be so. As far back as the 12th century, the need to give emotions some recognition influenced the growth of equity which advocated for good conscience and fairness, as against the strict letter of the law. Judicial activism today also advocates that judges should sometimes deviate from logic alone and factor in extra considerations. Therefore, Law students are not trained to be robots which lack emotions, rather they are only taught to be analytical and wary of emotion, as it can be extremely misleading. Law students are trained to distil emotions from logic and to never prioritize emotion over logic or else it may occasion miscarriage of justice. The nexus of both lies in how we apply logic to analyse and draw conclusions based on individual viewpoints. Oliver Wendell Holmes Jr agrees when he said, the life of the Law has never been logic but experience.

The take-home is when you know Law students inside out, what you see is no longer a “Law student”, but a human with flaws, depth, sarcasm, laughter and fun.